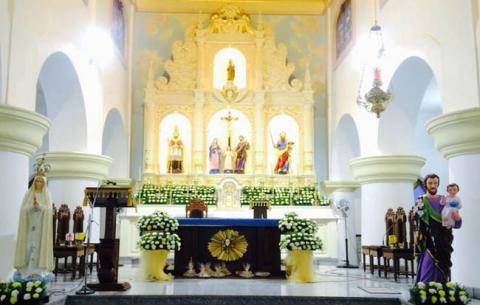 The Church of Our Lady of Life at Mattancherry was one of the first churches built by the Portuguese in the suburbs of the city of Santa Cruz de Cochin. Built in the second half of the 17th century, the original church was constructed in wood and had a roof of vegetal matter. It underwent several transformations until it was finally built in stone and mortar, following a general tendency of the churches in this area. At first, the church mainly served the community of Saint Thomas Christians living in the area who dedicated themselves to the pepper trade. In 1622, a large group of Saint Thomas Christians held a meeting in the churchyard, where they took a solemn oath before the cross at the entrance which led to a complex process of opposition between this community and the Portuguese religious authorities.

The church was once more the stage for confrontations in the 19th century, this time between supporters of the Portuguese Padroado in the Orient and the Propaganda Fide, and it had to be repaired after the conflict. Although it has been profoundly transformed, the age of the construction can be verified through the chancel, which has thick Tuscan columns that go back to the original 16th century building. The main portal, which shows signs of being standard Manueline style from the first decades of the 16th century, is also from this time. Its design is similar to that of the portal of the Church of Our Lady of Hope at Vaypin and translates an archaism that attempts to perpetuate the memory of the Manueline period and the Portuguese military hegemony in the Orient.

The church corresponds to the original model of a Mannerist church in its architectural plan, a model disseminated in the middle of the 16th century and which was characterised by an interior of a simple nave with no lateral galleries. It is almost identical to the Church of Our Lady of Hope at Vaypin. The façade has three storeys separated by wide friezes. The central body is higher than the lateral ones, the frontispiece being flanked by back-curved wing panels and topped by a cross. The three bodies of the façade are separated by double columns, which follow the Mannerist style in vogue in the second half of the 16th century. A small exterior staircase leading to the bell tower adjoins the main façade, which was a continuation of very old solution that is found in the churches of Vaypin and Narakal. Showing a clear influence of Hindu temples, the church stands in a square surrounded by high walls and with a portal as an entrance. A large, beautiful cross on a pedestal of Mannerist design stands in the middle of the square in front of the church. A very old parochial house of gracious proportions completes the ensemble.