UNION OF ST. CATHERINE OF MISSIONARIES FOR SCHOOL 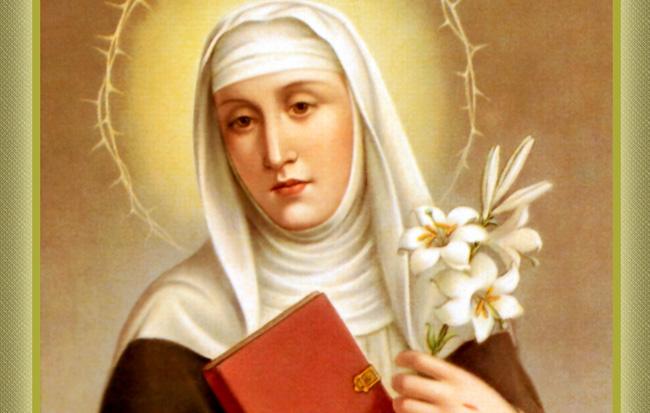 The Union of St. Catherine (of Sienna) of Missionaries for School is a Dominican Congregation founded in Italy in 1917 by Mother Luigia Tincani, born in the last quarter of the nineteenth century, to be exact in 1889. That fading quarter of the century was a seeptic and anti-cleric era, waging war against the Catholic faith and traditions in Italy. As a young student she realized that a decisive battle for the right education had to be fought in the very sphere of state-run schools where the majority of young girls and boys received their instructions. Influenced by the Dominican Fathers in Bologna who dedicated themselves to the preaching of 'Truth', her quest and thirst for truth and sharing it with others led her to the founding of a new Congregation with teaching as its main apostolate.

The Community took its shape and form in 1923 but its official beginning was on 20th August 1924 in Gubbio. His Holiness Pope Pius XII granted the definite approbation on January 25, 1943. Within a short span of five years the Community grew up and began to branch out. The cool foliage of the Congregation crossed the oceans to cast its cool shade over the subcontinent as well. A House was established here in 1947 which actually was in the territory of Pakistan. Still later in 1967 yet another Institute was set up but this time in Bombay. Now the Congregation has expanded from Italy to Poland, Holland, Pakistan and India.

It was through the Sisters of Our Lady of Rosary that His Excellency came into contact with the Sisters of St. Catherine and that familiarity attracted them to the Diocese. Rev. Mother Rosa Caterini, Mother General of the Dominican Tertiary Sisters of Our Lady of Rosary, was on her way to Cochin to start a convent here. The Rev. Mother stayed at the Convent of the Society of St. Catherine in Juhu North, Bombay ( Mumbai ), in December 1975 where the Dominican Sisters of Iolo often used to stay while on transit.

This led to further contacts and subsequently the Congregation sought His Excellency's help in raising vocations and candidates from Cochin Diocese. Thus Ms. Rita Marottickaparambil reached the Community as the first aspirant from the Diocese. When His Excellency went to Rome, the Bishop visited the Generalate in visa Appia. Fr. Reginaldo Bernini, the Dominican priest at Piazza, also became interested in the Union of St. Catherine of Missionaries for School. Before long two more from Cochin joined the Congregation and this prompted the Mother General to raise the issue whether her Congregation would be acceptable in the Diocese of Cochin. An official request was placed before His Excellency in January 1983 to which the Bishop responded positively, inviting them to come and visit Cochin.

Accordingly, on 16th February, 1983, V. Rev. Mother Anna Maria Balducci, the Mother General and Rev. Sr. Marinella Andreotti, the Assistant Mother General, arrived in Cochin. Accommodated at Shalom, Bishop's House, Fort Cochin, they were taken around to examine different places to choose one suitable where they could erect their convent. When they saw a plot along the eastern side of a lake behind Aquinas College, a beautiful location, they fell for it. The property altogether 25 acres had been bought by the Diocese as per the requirement of the Kerala University to start the Aquinas College. Later on, on condition that the college building would be a three-storeyed one, permission had been to run the college within an area of 10 acres.

The rest of the property could be used for the various plans and projects the visionary in the prelate had prepared sketches and given shape to in his mind, visualising the over all development of the smallest diocese in the country. Portions from the property had already been used for the Pallottine Convent, the Diocesan Pastoral Centre etc. So His Excellency could allot to the Dominican Missionaries of School a large sized property full of coconut trees along the shore of the lake. The Bishop offered them a house as well at Thoppumpady where they could accommodate themselves temporarily. Rev. Srs. Marinella Andreotti, Rita and Annakkutty representing yet another Congregation new to the Diocese thus came floating over the channel to find good bed to plant a shoot in the fertile soil of Cochin on 10th April 1983.

While a house at Thoppumpady was being made ready, they were temporarily put up at Shalom, Fort Cochin and then a week later, they shifted to this house. The Decree of the Canonical erection of St. Catherine's Convent was issued on 18th of the month and on the same day the "St. Catherine's Convent" of the new Congregation was solemnly blessed. The Parish Priest of St. Sebastian's Palluruthy, Rev. Fr. Xavier J. Karuvally, Rev. Fr. Lombardo, a Passionist Priest from Italy, a few other priests and nuns were present for its blessing and to participate in the Holy Mass concelebrated by His Excellency. On April 26, the Blessed Sacrament was installed in the small chapel.

The property behind Aquinas College was registered in a deed as gift to the Congregation on 8th June 1984. The foundation stone for the new convent building had already been laid on 14th April 1984. Madre Anna Maria Balducci, the Mother General, Rev. Sr. Nicolina Irio, Assistant General, Secretary Sr. Agnese Pierattini and Sr. Marinella Andreotti had been present then. Again, it was Papa' Ildebrando Crespi from Italy who encouraged the Sisters to start the work of the convent at Edacochin.

It was a grand occasion and a great honour for them when His Excellency, Dr. Paolo Andreotti, the brother of Sr. Marinella, arrived and stayed with them for a few days. He was the retired Bishop of the Diocese of Faisalabad in Pakistan. The members of the Community engage in the catholic formation of youngsters mainly through teaching, an interaction between mind and mind, a communication from soul to soul. Sisters dedicate themselves to the service in the field of religious formation, teaching and also Catechism.