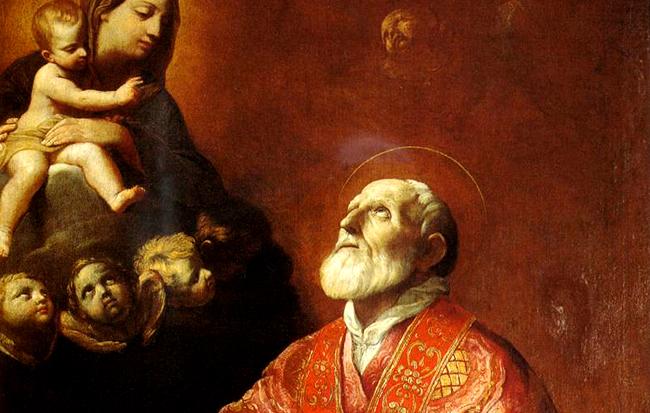 St. Philip Neri, born in Florence on 21st July 1515 as the son of Francesco Neri and Lucresia Soldi, was ordained priest at the age of 36. He had an ambition to come to India as a missionary but his confessor ruled out saying: "Your India will be in Rome." In fact St. Philip Neri carried out his activities in the problematic Rome of the sixteenth century. He took care of the outcasts and taught them about God so that St. Ignatius Loyola called him "The Church bell".

Philip founded the Oratorian Congregation to help the poor and the needy. The fervent activities of the Order were very useful in the years of the jubilee, 1550 and 1575 when he received and served the poor, the needy and the pilgrims in the Holy Trinity Poor House in Rome. He never returned to his native place (Florence) but remained working in the eternal city until he was called to his everlasting reward on 26th May 1595. He worked incessantly for the betterment of Rome and so was acclaimed as the "Apostle of Rome".

On September 25, 1661 Padre Antonio Maria Salata, the founder of the Order Figlie Di Nostra Signora Della Misericordea, was born in Bolzancto, Genova, Italy, as the son of Filippo and Maria Teodora Loreto. In December 1693, when he was 32 years, Padre Salata entered the Oratorian Congregation of St. Philip Neri at Via Lomellini in Genova. Padre Salata was a man of great ideals and was doing everything possible for the glory of God and for the temporal and piritual uplift of the fellowmen.

A man of compassion and prudence, he was one with a strong character. He was so severe with himself and his daughters that Padre Salata left the words of the Gospel, "For what will it profit them if they gain the whole world but forfeit their life? Or what will they give in return for their life?" as the guiding principle of life. Though he didn't compel them to take vows, Padre Salata asked his daughters to observe the evangelical counsel by living so and observing the rules in order to have proper sanctification.

In the beginning of 1700 Padre Salata was shaken by the plight of the abandoned girls living in the city of Genova. Without anyone to take care of their needs material or spiritual, theirs was a miserable existence. He wanted to bring them together and help them in their life and growth. So, the Padre acquired an abode to accommodate the girls discarded and deserted by the society and welcomed such in.

With the benign help from some ladies rich in means and generosity, he could realise his dream. The young girls were entrusted to the care of those ladies who taught them Christian doctrine as well as feminine crafts. With the encouragement of the then Archbishop of Genova, Cardinal Lorenzo Fieschi, Padre Salata could establish an association, "Opere di Figlie di Nostra Signora della Misericordia" on May 15, 1705.

Figlie di Nostra Signora della Misericordia, under the protection of Virgin Mary, established in Sarona, was not a religious Order. It was just an association leading a community life upon proper rules. As their founder was of the Congregation of St. Philip Neri and as the community was given the Spirituality of the patron saint, they were called "Le Filippine". On 6th February 1958 the Sacred Congregation of the Religious deliberated on the conversion of this society into a Religious Community of diocesan rite. Thus on 18th August, 1958, Cardinal Giuseppe Siri approved the first constitution of the new Religious Congregation with simple vows. In the same year the Congregation entered the International Federation of Religious Families.

The Congregation thus started in 1705 was not a big Community. Though the Sisters were fewer in number, the Congregation flourished in Genova. They were having vocations only from Genova until 1955 when Madre Ada began to receive girls from other regions as well and thus many came from Bruzzo. The problem of shortage in vocations surfaced in the recent years and the Congregation was compelled to close some Houses. They started praying, therefore, to have vocations at least from regions outside Italy.

On the occasion of the special chapter in 1988, the general assembly discussed the matter and some of the participants aired the idea of going out to the third world countries, especially to India in search of vocations. But it was no simple matter to realize this idea as it involved trekking through many processes. First of all, they had to open a House in some fertile land which was not quite to the liking of the Congregation. Naturally, the proposal was not accepted but later the Community was compelled to comply with the proviso because of the extreme scarcity of Sisters. In the meantime, the Congregation continued its prayers.

As a result an Indian Sister, a native of Kerala, turned up with the intention of joining the Congregation. The Sisters were immensely happy to have her; for, they were certain that it was providence that sent her to the Community to realize their aspiration. When she joined the Congregation, they asked her to search for vocations from among her natives. Thus she met many bishops and talked about the Congregation.

In 1990 the Superiors of the Order had occasions to have encounters with three Indian bishops, two of the Syro-Malabar Rite and one of Latin, at Torino. All the three bishops voiced in unison that the Congregation was so much welcome to India and that the fertile land produced many a vocation. That Latin prelate was our late Bishop, Dr. Joseph Kureethara, by whom they were more attracted. These encounters helped them have a better idea and clearer picture about the situation in India.

The Bishops enlightened them also on the proviso of the Bishops' Conference on native vocations to the various religious Congregations outside the nation. The Superiors were informed that the Congregation concerned would have to furnish the formation of the candidates for a period of at least two years in India itself. Only after a formation after such a duration could they be taken out to Italy or other destinations to do their novitiate, juniorate etc. with the permission of the bishop of the place concerned.

All the three bishops encouraged their ideas about and aspiration on coming to India and all appeared ready and willing to help them set up a House here. Some how the Superiors were rather better assured or more convinced by the bishop of Cochin, who advised them to come to India first "to see, to study and then to understand" every thing. Of course, His Excellency extended an invitation also to them to visit Cochin for the purpose during the Christmas season of 1990 - 91.

The General Assembly of the Congregation mooted the idea as a matter of uncertainty, adding undue dimensions to the dubity whether they could face such an adventure or not. But as a Community seeking close collaboration with the aspirants from the third world, the Community found in His Excellency, Dr. Joseph Kureethara, a real guide and promoter. They took a positive resolution and thus planned to have a journey to India with the object of opening a House here.

They were supposed to arrive in Cochin on 21st January, 1991 and the bishop was eagerly awaiting their arrival. His Excellency's heart was full of joy thinking that he could bring to Cochin one more Congregation to proclaim Jesus Christ. But time had not reached its fullness; for, the journey had to be postponed to 6th May because of the outbreak of the Gulf war. It must have been Providence that brought this twist in arrangement using the war as an obstacle because if they had come in January they probably might not have had the place for House in the parish of San Thome awaiting them.

Thus when the time was ripe, Rev. Sr. Bridgit Thazhakuzhy (a Syrian Sister) happened to be on holidays in Kerala. V. Rev. Mother Angela Ronco, Suore Philippine, Genova, had earlier come to know about His Excellency Rt. Rev. Dr. Joseph Kureethara through Rev. Fr. John Thattumkal who was the Vice-Rector at Propaganda College, Rome. Mother Ronco had asked Sr. Bridgit to come and meet the Bishop in Cochin. In June 1990, Sr. Bridgit called on the Bishop and informed His Excellency that St. Philip Neri Sisters would like to open a House in the Diocese. Subsequently Mother Angela Ronco together with Msgr. Paolo Rigon and Sr. Bridgit visited His Excellency on 22nd that September, while the Bishop was at the Generalate of the Sisters of the Holy Nativity in Turin, Italy.

Finally Mother Ronco, Msgr. Regon and Sr. Bridgit arrived in Cochin on 7-5-1991 and they stayed at the Rosary Convent, Palluruthy. They were looking for places to set up their House and had already visited some places to start their convent. When they reached Neendakara Parochial House, having seen a dead snake in the canal and having been very frightened, had decided not to take that place. Well, the location of the orchard for planting the shoot of Congregation must have been pre-destined.

Through the help of Rev. Fr. Thomas Parathara, Parish Priest of San Thome, they finally selected a property of Mr. K.G. Paul Kadavilparambil in the parish. After making arrangements for its purchase, they returned to Italy. On October 11, 1991, Mother Angela Ronco, Sr. Clement and Sr. Theresina reached Cochin again and formally sought permission to establish their convent. There was an old two-storeyed house which they remodelled and thus the first St. Philip Neri Convent in the country was blessed and inaugurated at San Thome on October 23, 1991.

As their motivation is derived from their charism of the "Greatest Love" they should express their joy and love in every activity, imitating the greatest models of Jesus Christ, Virgin Mary and St. Philip Neri. They teach catechism in the parish, attend to all the activities of the youth, especially girls and in every way help in the pastoral work of the parish.