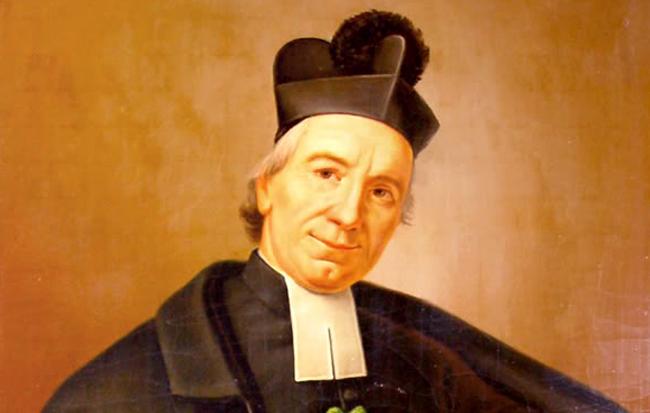 The religious Congregation, the Sisters of St. Joseph Cottolengo, was initiated by St. Joseph Benedict Cottolengo. He was born at Piamonte on May 3, 1786 and was ordained priest on June 8, 1811. A French woman in the family way, Mrs. Maria Gonnet, while travelling by train from Milan to Paris together with her husband and three children was compelled to break her journey at Turin. She could not get admitted to any hospital to have access to professional help during that critical time of bringing to bed. So the poor mother breathed her last - one of the innumerable unfortunate ones to have met with such an untimely exit. This event of a sad and sorrowful separation of the mother from her family was in fact the falling of a seed in fertile soil.

The unfortunate incident shook St. Joseph Cottolengo so much that he was moved to pity. He began to think of ever so many mothers in similar situations and to deliberate on helping such homeless ones. He sensed the urge from within and realised that God was calling him to dedicate his life for the benefit, betterment and welfare of the hapless, helpless and hopeless homeless ones. So he started his first hospital on January 17, 1828 in "Volta Rossa" near the Corpus Domini Church in Turin and established The Little House of Divine Providence - Piccola Casa on April 27, 1832.

To work with him at circumstances concerning the dames and damsels in distress, he knew he would need the warm, soft hands of daughters, sisters and mothers. So, with the help of Madre Marianna Nasi, he set up a Convent in the name of St. Vincent de Paul in 1830. Later it assumed its identity as the Congregation of Cottolengo Sisters. The first members were Caterine Piolato from Virle Piamonte and Caterine Bergero from Airasce and Fr.Virle from Piamonte.

St. Joseph Cottolengo also started a Community of lay brothers, now known as Cottolengo Brothers, in the year 1833. Following this a Community of Priests and even a Community of Cloistered Nuns were established in 1841. Having accomplished as much by the time he reached 56 years, he was called to his eternal reward on April 30, 1842 at Chieri.

St. Joseph Benedict Cottolengo was beatified by Pope Benedict XV on April 29, 1917 and was subsequently canonized as a saint by Pope Pius XI on the Feast Day of his heavenly patron in March 1934. During his life he used to say that he would like very much to go to India to take care of the discarded and the deserted there and the good God in His providence has made this yearning of Saint Joseph Benedict Cottolengo a reality! Deo Gratias! And that too, Dei gratia, in the Diocese of Cochin, once a mother diocese in India !!

The Congregation of Cottolengo Sisters established their first House in the Diocese of Cochin and it was blessed by His Excellency, Alexander Edezhath on 30th April, 1978. In a matter of weeks, a special school for mentally retarded children commenced functioning in June. Realising the need for one in the area, a dispensary to extend help was opened in June in 1980 and in 1982 a physiotherapy unit also became operational. In the evenings of his life, while looking back on yester years, Bishop Dr. Joseph Kureethara must have been blessed with many a moment to relish that soft and soothing sensation which fills one's heart with overflowing warmth at the feeling of fulfilment that His Excellency also could serve as a humble little instrument in His compassionate hands to introduce the Community that cared so much for His least ones into the Diocese of Cochin - his own Diocese!

Rev. Dr. Joseph Kureethara had a personal role to play in the adoption of the Congregation of the Sisters of St. Joseph Cottolengo to the Diocese. Personal notes of the bishop sheds light on the events which led to the Community reaching here. The prelate narrates how he first came into contact with them and how he later became instrumental in the Order finding a bed in the fertile field of the land of coconut trees.

Rev. Dr. Joseph Kureethara, then Rector of Mount Carmel Petit Seminary, Cochin, was at the Convent of the Dominican Sisters, at Iolo in October 1969. Madre Rosa Caterini, the Dominican Superior General, informed him that V. Rev. Mother Bianca Crivelli had come there specifically to meet the Rev. Father. She was with Rev. Sr. Angala Zoni, the Regional Superior of the Cottolengo Sisters who knew well how the Dominican Sisters received some candidates from Cochin. Perhaps Sr. Angela purposely brought Mother Bianca Crivelli, their mother General, from Torino to request help for raising vocations for the Congregation from India.

The Rev. Father was rather reluctant as he was already exhausted by the efforts and ever so many hardships he had in taking four groups of boys and girls to Italy. Quite naturally, the Rector was understandably disinclined to be personally involved. So the Rev. Father informed Madre Bianca that he could do anything only with the specific instruction from the Bishop of Cochin. The Rev. Mother then and there secured the address of the Bishop, His Excellency, Rt. Rev. Dr. Alexander Edezhath.

Mother Bianca spared neither time nor effort in writing to the Bishop of Cochin who knew the Little House of Divine Providence in Turin very well. While in Rome during the Vatican Council II, His Excellency with some other bishops had visited the Cottolengo Institute and had been much impressed by their missionary work. His Excellency on receipt of request awaited the return of the Rector to instruct the Rev. Father to find vocations for the Cottolengo Community.

Earlier in 1965, Fr. Joseph Kalappurackal and Fr. Joseph Kureethara had occasion to visit the Piccola Casa in Turin and they had been very much edified. On receiving the instruction from the Bishop, the Rector had that warm sensation that he was again in His loving hands as an instrument to initiate the introduction of the Little House of Divine Providence to India. With all its different branches of Sisters, Brothers, Friars and perhaps even the Cloistered Nuns, the Rev. Father began to muse on the possible contributions of the Community to the Church in the country.

When the Rector found that bishop Edezhath was very much enthusiastic about garnering vocations for the Community of Cottolengo of Turin, he readily agreed to be on the look out. Before long, with the help of his assistant at the seminary, Rev. Fr. George Malatt, the Rector was able to gather a dozen hopefuls for the Congregation. On April 4, 1970, accompanying the dozen and another six for the Missionaries of The Incarnation at Frascati, Rev. Fr. Joseph Kureethara flew again to Rome.

They were warmly received by the Cottolengo Sisters, the Mother General and Sisters from Frascati and all together went to Cottolengo Institute near St. Peters Basilica. There, the Rev. Father offered Mass at the Convent chapel and soon all hurried to Piazza San Pietro to get Papal Blessing after the Sunday noon Angelus. On April six, Rev. Dr. Joseph Kureethara and the aspirants reached the Central Railway Station of Turin, where there was a bus full of Sisters awaiting them to extend a warm welcome and escort them to Piccola Casa, the Little House of Divine Providence, Turin.

In due course, reminiscent of the dozen disciples, the first twelve from India to the Congregation made their primal profession on September 27, 1972. Subsequently, on 31st July, 1974 Signor Padre, Don Luigi Borsarelli, Madre Giovanna Formenti, Mother General and Br. John Thattumkal arrived in Cochin to discuss matters concerning the establishment of a Convent in Cochin. They were warmly welcomed, their request was positively responded to and thus their mission had a successful finale.

From the many places proposed to them, they seemed favourably inclined to the property along the western side of the Bishop's house. The plot was placed at their disposal as a free gift from the Diocese. On this site the Canossian Sisters had been conducting a Creche since about 1960 but had vacated. After returning to Turin, the Congregation finalized its plan on setting up the Cottolengo Institute there. Thereupon formal request from the Mother General, Sr. Giovanna Formenti, was presented to the Bishop on April 30, 1975. On 12th of the very next month His Excellency Dr. Alexander Edezhath granted his permission and on the same day appointed Rev. Dr. Joseph Kureethara as the Director of Cottolengo Institute.

On December 14, 1977, seven Indian Sisters viz. Rev. Srs. Francesca, Chinnamma, Elizabeth, Mary Moor Jacinha, Getty and Mary John, along with two Italians, Rev. Srs. Giovanna Bruna and Agostina Melis reached Cochin. With their arrival, dreams and plans turned to reality when the new Convent was blessed and inaugurated on April 30, 1978 in the temporary building, Old Creche. The inauguration was followed by a concelebrated Holy Mass by Rt. Rev. Dr. Joseph Kureethara, by then the Bishop of Cochin. To mark the beginning of their mission here, a special school for the mentally retarded children was started on the same day.

The Community in the Diocese could not continue on makeshift structures and temporary arrangements. Plan for a new building for the Convent was prepared and the foundation stone for the same was laid on April 29, 1979. Meantime, a dispensary was opened for the benefit of the needy in November 1980. Finally when the new edifice was completed, the Little House of Divine Providence, Convent of the Sisters of St. Joseph Benedict Cottolengo in Fort Cochin was blessed by His Excellency, Rt. Rev. Dr. Joseph Kureethara on April 30, 1981.

The Sisters started a Physiotherapy section and a laboratory later and these were inaugurated on February 6, 1982. The new building of the special school for the mentally retarded subsequently commenced functioning from June 4, 1984. The Congregation has now branched out from the Diocese of Cochin and their second House was opened on March 25, 1983 at Karimkulam in the Diocese of Trivandrum and later, a third in the Archdiocese of Bangalore on May 31, 1989.

In all their activities in the field of service, the Congregation endeavours to be "messengers of His providence" and aims at the glory of God. Their deep concern, selfless sacrifice, enthusiastic efforts and loving care are warmly inclined towards the less fortunate ones who suffer and are in dire straits. So they commit themselves wholly to the promotion of circumstances of the have-nots and the disabled persons, helping them to improve their health and education. With this in view they run a special school for the mentally retarded, a dispensary for the poor and a physiotherapy unit for the disabled.