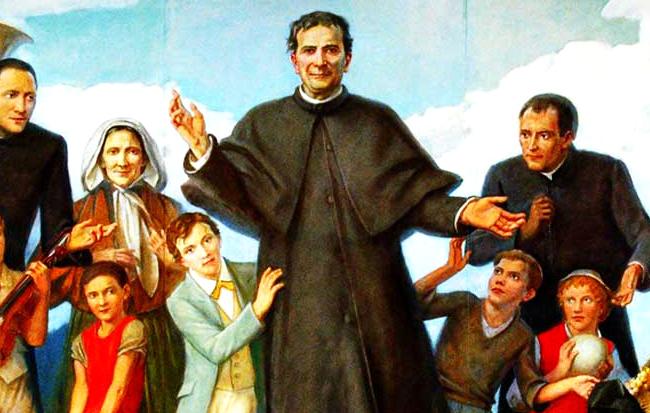 St. John Bosco (1815-1888), known as the Father and Friend of youth, is the Founder of the Order. As a young priest he found many young men in the city of Turin who were turning criminals due to the lack of love, care and opportunities in life. Dedicating his life for their cause, he started Oratories for them and later, choosing some who followed him very closely, formed an Order. The Congregation was formally approved in 1869 and by 1875, he started sending missionaries outside Italy to South America, France, Spain etc. In 1926 the first Salesian Missionaries reached India and today, in India there are eight Provinces with nearly 3000 Salesian Fathers and Brothers. The Salesian Community at Palluruthy belongs to the Province of Bangalore, comprising the States of Karnataka and Kerala.

Oft repeated an adage in print is "The child is father of the man." Still more reiterated an edict from platforms is "On the young rests the future." When such maxims and declarations get down to the real rough ground of sweat and blood, precepts and proclamations get wiped clean into oblivion like the wind-swept autumn leaves. The very rare few who dare step into the 'garbage' of society to love and care for those ill-starred and ill-fated ones are queerly glanced at as crazy or cranky. No heed need be taken of such receptions and reactions of the worldly wise, teach the holy, lofty lives of Saints!

Hence, scantily noticed and the least advertised is the Salesian Community. They just go about silently doing their work and fulfilling their mission irrespective of rewards and awards. Of course, only those who have absolute faith in God can savour the truth and can relish the taste in the instruction "….when thou givest alms, thou shalt not so much as let thy left hand know what thy right hand is doing, so secret is thy alms-giving to be; and then thy Father, who sees what is done in secret, will reward thee". Only such will have the courage of conviction to be engaged likewise, yes, to live thus!

The Salesian Community life centres round the uplift of those deprived, discarded and disregarded 'insignificant minority'. The society is almost ignorant, nay, even indifferent about the 'outcasts'! Only those scarce few with real feelings and touch human, can understand and appreciate what a noble and sublime service the Salesians are at! Well let us offer them what little 'widow's mite' we can, stretch however weak a helping hand possible and more, raise our earnest hearts to the Heavenly Father in fervent prayer and beseech, 'Oh merciful God, bless them and their wards always and keep ever in Your peace, joy and love!

The Salesians reached Cochin to attend to the needs and problems of the misused youth. The humble beginning of their service at present has spread over a vast area of youth care. His Excellency Dr. Jose Vieira Alvernaz, the last Portuguese Bishop of Cochin, had, in fact, invited the Salesian Fathers to the Diocese in April 1944 and again in April 1947. But almost three decades had to roll by before their presence and mission could grace Cochin. Divine design had designated the seventies to claim the fullness of time.

To trail its commencement and course within the Diocesan territory, it was on 26th May 1974 that the Corporation of Cochin accepted the collaboration of the Salesian Fathers who had a monastery at Pachalam, to start a House for vagrant boys who reach Cochin from various parts of India. Due to extreme poverty or due to broken families, these children leave their parents, families or guardians and go about wandering here and there and such children are ill-treated, misused and abused. They travel by trains without tickets and many of them reach Cochin city to be trapped in various vicious webs of vices and get dumped into jail.

The Corporation started a Poor Settlement at Palluruthy and children and elderly people who were found in the city roaming around begging were apprehended and brought to this settlement. The Corporation provided shelter and supplied food, medicine etc. but these were not enough. The children especially needed education, security, training for job and above all, love and in future a family and children - a home to call their own! The Salesians are well known in this mission for the stray and of the street. Hence it was a wise move on the part of the Cochin Corporation to have asked the Salesian Fathers of their unstinted service in the field of these "untouchables" of modern times.

An institute named "Sneha Bhavan" ( Home of Love ) was started in Palluruthy at a beautiful spot along the main road and touching the Vembanad lake facing the Willingdon Island, Cochin Airport etc. There was an old oil mill on the northern side of St. Mary's Syrian Church at Palluruthy. This was demolished and some of the old sheds were used to start the Sneha Bhavan. A large playground was prepared and Sneha Bhavan was inaugurated on May 26, 1974. The Salesian Fathers had to come from Pachalam, Ernakulam and hence it was imperative that the Salesians had a monastery of their own near the Sneha Bhavan.

The Salesian Provincial, Rev. Fr. T. Panakezham, S.D.B., asked permission of His Excellency Rt. Rev. Dr. Joseph Kureethara to open a Monastery in Cochin Diocese, on July 6, 1976. Ready response in favour was despatched soon and so in 1977 a separate property was bought by the Salesians. There was a small house on the plot into which the fathers moved on July 23, 1976. A large house was blessed on January 31, 1977 and another extension of the building was blessed on 2nd February 1979. On October 23, 1979, Rev. Fr. Thomas Thayil, Provincial of Bangalore Province, requested permission for the Canonical erection of Don Bosco Welfare Centre at Palluruthy and permission for the same was granted on November 6, 1979.

The Rector Major, V. Rev. Fr. Egidius Vigano, S.D.B., made his visit to the House at Palluruthy on October 2, 1979. Don Bosco Nagar, a housing colony along Pullar Desam Road consisting of four houses within the parish of St. Joseph's, Chirackal, was inaugurated on May 31, 1978. Another five houses were made available on December 22, 1978 for the boys of Sneha Bhavan to which four more were added later in February 1979. Rev. Fr. Philip Thayil, S.D.B., published the children's Bible on June 3, 1979. A new wing of Bosco Bhavan was completed on 17th March 1982. An automobile unit at Palluruthy was started on October 25, 1984 and a technical workshop was started at Palluruthy on 31st January, 1993. The National Conference of the Salesians was conducted at Palluruthy in August 1994.

The foundation stone of Bosco Nilayam was laid on September 17, 1985 to the south of the Rosary Convent, Palluruthy. The grown up boys started staying in an old house at Bosco Nilayam, blessed on the feast of Assumption and independence day in 1986 and a second floor was built and blessed, again on the symbolic day of emancipation from social and spiritual slavery in 1994. Every year the Fathers organise holiday camps in the neighbouring schools, celebrate children's day and organise leadership camps.

The Salesian mission is here to receive boys from the street with open hands, educate them, give them skills, prepare them for family life and rehabilitate them into the society and above all give them fraternal care and love. So they step into the streets, meet and take in such to their monastery or abodes and provide them all necessities like food, shelter, clothing, health care, education, skills and job placements. The Salesians develop them into full fledged humans through counselling, personality development and spiritual formation. Deo Gratias!