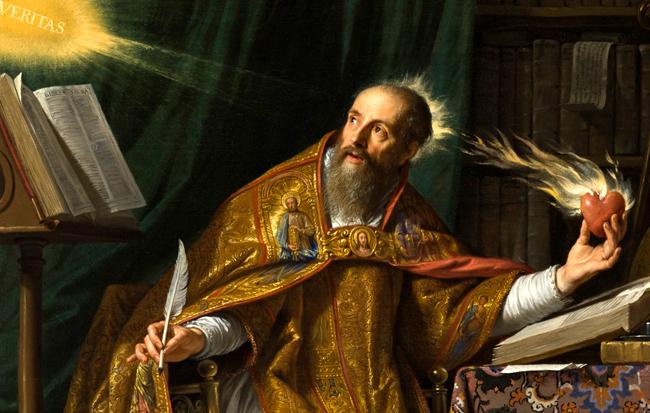 The Augustinian way of life took it's sorted shape from the mind of St. Augustine himself after his own conversion and subsequent return to Tagaste in the year 388. There, along with Posidius and a few friends, he initiated the spiritual brotherhood of young men of his time, spending their lives in prayer, scripture reading and manual work. Gradually several groups of hermits came into existence following the same spirit and life style which later, in 1256, Pope Alexander 1V by his decree unified into a religious Community. The present Order of St. Augustine thus became an entity. After a humble and slow beginning, the Augustinians with their Generalate in Rome now have over 28 provinces spread over 48 countries with more than 4,000 priests. St. Augustine's Seminary at Edacochin is the restorative effort of the Order that was flourishing from 1572 all over India, especially at Goa and Cochin until the time of the Portuguese suppression of religious orders in 1834.

His Excellency, Bishop Joseph Kureethara well realised today is built upon yesterdays and as such was enthusiastic about history. This predilection for the past prompted His Excellency to secure and store relics, remnants and remains of the bygone days which led to the framework of the Padroado Museum (Soon a structure for the museum right within the compound of the Bishop's House will be operational) and to preserve with utmost care, historical documents. Such records at the archives in the Bishop's House shed enough light on the not so much known history of the Augustinians in India beginning from 1572 to the present monastery at Edacochin.

It would be gross injustice and insult to adapt matters historical and colour narrations in the expressions of the compilers and so allow us to follow His Excellency's own notes to pay tribute to the historian in the late Bishop of Cochin, Rt. Rev. Dr. Joseph Kureethara.

"The arrival of the Portuguese Augustinian Fathers in India was in 1572. Until 1663 the Augustinians were here. When the Portuguese Government suppressed all the Religious Congregations, the Augustinians also were forced to leave. In India they had nearly 20 Houses, seminaries, orphanages and educational institutions. Even today there remain in Goa old monuments of Augustinian presence, like St. Augustine's Tower, Sancta Monica Convent etc.

"The contributions of Augustinians in India were always praiseworthy. Dr. Alexis Menezes, an Augustinian Archbishop of Goa, saved the Catholic Church in Kerala, by conducting the famous Synod of Diamper (Udayamperoor) in 1599.

"There were many Augustinian Bishops in the Indian sub-continent - two in Goa, five in Cochin and nine in Madras. The Augustinian Monasteries were established in Goa in 1572, China in 1575, Cochin in 1579, Japan in 1602 and in the Philippines in 1605.

"The Augustinians reached Cochin in 1579 and the first Augustinian Monastery here was erected in 1579 at Kalvetty, Mattancherry. It was Dom Mathias de Medina, the fourth Bishop of Cochin who invited them. He requested Fr. Antonio de Peik Savo to institute a Monastery in Cochin and later on Fr. Miguel dos Ann Jose, Fr. Markose de Garcia together with some other priests were sent to Cochin. In 1580 a chapel dedicated to Our Lady was entrusted to them. Later on a monastery and a larger church were built there.

"Some of the Augustinian Fathers planned to move to Tibet and on their way some were killed. Some worked near the present pilgrimage centre of Our Lady of Bandel Church of Calcutta along the Hoogly River. These incidents happened towards the end of 16th century, when this area was within the Diocese of Cochin. After some years the Augustinians left. This Bandel Church and Monastery are now in the hands of the Salesian Fathers. The Rector of this Monastery is still called "Prior" to this day.

"At a meeting of Augustinian Fathers held in 1966 at Villa Nova University in Philadelphia USA, it was decided to re-establish the Augustinian Order in India. Rev. Fr. Agostino Troppe, the General, decided to get the co-operation of different Provinces. Fr. Emiliano Vega, the Provincial of Spain, was entrusted with the Vicariate of Philippines. Fr. Casimiro Garzia who visited India in 1970 submitted a report to the Provincial in Spain. The Provincial, Fr. Dionysio Burno, who was entrusted with the Vicariate of Philippines, appointed Fr. Andreas Niño and Fr. Maximo Matheus to visit India and they did so.

"Rev. Fr. Constantine, O.C.D., a Professor at Alwaye Seminary, brought an Augustinian Priest from the Philippines who was searching for vocations from India. I promised to help him. Later in 1973 when Bro. Francis Kothakath expressed his desire to join some religious order, I suggested that he join the Augustinian Order in Manila. Finally he was admitted there. Some others also joined him.

"Rev. Fr. Maximo Matheus visited India searching for a suitable place to start an Augustinian Monastery. He had the addresses of all the Bishops in Kerala and even of the bishops up to Bombay. All the bishops whom he visited were ready to receive them. He went to Verapoly Archdiocese and selected a place near the Major Seminary of Alwaye. On May 16, 1981 he came to visit me. When he told me that he had already selected a place in Verapoly Archdiocese I encouraged him.

"Before he left the Bishop's House he noticed on the wall of the Parlour the names of the 33 bishops of Cochin. Among them he saw the names of five Augustinian Bishops. He was very much surprised to know that there were five Augustinian Bishops in Cochin Diocese and also an Augustinian Monastery. Then he told me that he had to reconsider his decision. The next day he visited me again and told me that he had changed his plan and that he wanted the Monastery in the Cochin Diocese itself.

"Rev. Fr. Francis Kothakath, had, in the mean time, been ordained. And he had come to Cochin in March 1978. So, Fr. Maximo, together with Fr. Francis, went round visiting a few places in Cochin. They were looking for suitable places to set up their monastery.

"We sat down together and prepared a request to the Provincial of the Augustinian's. He returned to Philippines with my request, addressed to V. Rev. Fr. Miguel Manrique. Finally Rev. Fr. Miguel Manrique O.S.A., the Vicar General, sent the letter from Rev. Fr. Rubio Bardon Madrid together with his letter dated June 15, 1981, asking my permission to open a House in Cochin Diocese. Permission for the erection was granted on February 4, 1982.

"Rev. Msgr. Mathew Kothakath who was retired from parish work was staying at Shalom, Bishop's House then. Fr. Francis Kothakath did not want to start the monastery in Cochin. His plan was to go to the North. Msgr. Mathew persuaded Fr. Francis and finally he agreed. On December 18, 1981, Fr. Miguel Manrique, the Regional Superior arrived from Manila.

"Of the four Indian priests of the Augustinian Order, two were from the Malabar Rite, one from Malankara Rite and Fr. Francis Kothakath from the Latin diocese, Cochin. Now the question was, where to start the first Augustinian Monastery. In three dioceses? In three Rites? At the meeting held at His Eminence Cardinal Joseph Parekattil's House in Ernakulam, V. Rev. Fr. Miguel Manrique made his decision - in Latin Rite!

"They bought a property near Pashnithode, Edacochin, in 1984. The foundation stone of the Monastery was laid on May 5, 1985. The new House was blessed on August 28, 1988. The Fathers and Aspirants shifted to the new monastery at Edacochin on November 1, 1986.

"The main purpose of having come together is to live harmoniously in the monastery, intent upon God in oneness of mind and heart. At present the Order is totally involved in forming young Augustinians giving much emphasis on Formation. Also, the Order is given the care of St. Antony's chapel, Edacochin, in order to give spiritual assistance to the faithful of the locality."