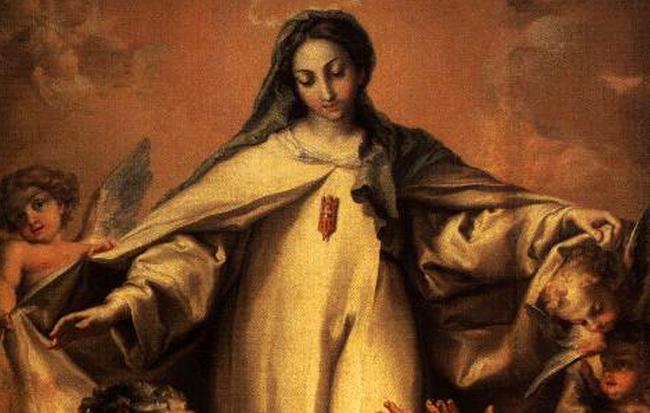 The Congregation was founded by St. Peter Nolasco in Barcelona, Spain, on August 10, 1218 to collect alms to pay for the release of Christians, who, being slaves held by the Saracen Muslims, were in danger of denying their faith. If the Macedonians were lacking in funds, they were to remain as hostages in pledge so that the Christians could be released immediately. These Mercedarians would remain as hostage until they could be redeemed. Redemptions were done generally every year.

The Order aims at living in the spirit of redemption as ''No greater love does a man have than laying down his own life for his friends" which is manifested in the model of Our Lady of Mercy. Through their devotion to the Holy Mother, the members are inspired to see Jesus suffering in those Christians who are oppressed by the new forms of social, political and psychological slavery which basically emanate from sin and become for the faithful just as dangerous as the slavery and oppression of older times (Constitutions #3). Therefore the members, by paying visits and doing suitable deeds of mercy, try to redeem Christians who are victims of different forms of captivity in which they find themselves exposed to the abandonment of the practices of Christian life and loss of faith. To this end, in imitation of Our Redeemer, they are prepared even to surrender their lives, should the situation so warrant.

"The new forms of captivity which constitute the proper field of the mission and fourth vow of the Mercedarians, occur where there is a social situation which contains oppression of human beings which springs from principles and systems opposed to the gospel and subjects the faith of Christians to danger or any situation which offers the possibility of helping and redeeming people who are in such situations."(Constitutions #16)

For several Provincial chapters of the Roman Province since Vatican II, the spirit has been urging the capitulator fathers to open missions elsewhere, particularly in the East. The Sisters of Our Lady of Mercy have been here since 1973 and the fathers naturally followed the same course to come to India.

At the request of V. Rev. Mother Maria Cabras, the Superior General of the Congregation of the Mercedarian Sisters, ten vocations were raised from the Diocese of Cochin. Knowing this the Father General of the Mercedarian Fathers, V. Rev. Fr. Domenico Aquaro, also sought help from the Diocese for vocations. At the same time His Excellency, Dr. Pietro Fiordelli, Bishop of Prato Diocese, Italy, asked for five girls to join the Gleaners of the Church, a Secular Institute. Thus altogether 25 candidates started their journey to Italy on 27th September 1969. The ten boys 1) Konnully Antony, 2) Pollayil Varghese, 3) Murikuthara Johney, 4) Kureethara Varghese, 5) Malatt Stanley, 6) Pandaraparambil Vincent, 7) Paratharavaliaveettil Peter, 8) Valiaveettil Mathew, 9) Vallonthayil Mohan, 10) Vallonthayil Babu were taken to their monastery.

Candidates to the seminary or to the various religious orders are expected to undergo a well disciplined life which they and their relatives are all well aware of and so the aspirants themselves get prepared for religious life. For almost one full year from the very beginning of their life in the monastery, these hopefuls had an American priest who trekked a tricky track of training and formation and so allowed almost absolute freedom. They had no discipline what so ever and no proper time table. They could sleep as much as they wanted, attend Mass just before lunch, have siesta till about 4 p.m. and after tea, go outing, sight seeing etc. and such a life was a shock to the boys.

After one year the boys were transferred to Santuario di Buonaria in Cagliari, Sardegna, Italy, which was a drastic change. Naturally, therefore, seven boys returned to India and the remaining three continued their studies at the Lateran University in Rome. Finally they also left the monastery and sought their own way of life and all of them settled down to family life. While these ten boys were having their own experiments in Italy, V. Rev. Fr. Dominico Aquaro took five more boys to be trained in the United States of America and the boys then chosen were: 1) Joseph Kuttipurath, 2) Tomy Veliyil, 3) John Birleigh Velikkakath, 4) Joseph Kadungamparambil and 5) Andrews Vallonthayil - all from Cochin Diocese.

They left for the USA on July 18, 1970 and reached their monastery, St. Raymond Nonnatus Seminary, LeRoy, NewYork. For their preparatory formation they were taken to Mercedarian House of Studies, 499 College Avenue, Niagara Falls, N.Y. It was very close to the beautiful waterfalls. Later on they were admitted to the Rochester Seminary. Some of them were ordained Deacons but getting dispensations left the monastery and only two were ordained priests. With the Dimissorial letter from H.E., Dr. Edward D. Head, the Bishop of Buffalo Diocese, N.Y. 14222, Fr. Joseph Kuttipurath and Fr. Tomy Veliyil were ordained priests by the Bishop of Cochin at Santa Cruz Cathedral, Fort Cochin on May 25, 1979.

Because of the anti-propaganda by the press about the candidates sent to Europe, the Catholic Bishops' Conference of India had made some norms regarding the recruitment of candidates joining religious Congregations abroad. Thus, sufficient period of preparation for candidates in India itself prior to their departure was made obligatory. Before these norms were passed, the Mercedarian Superiors in Rome had been advised to start a small monastery in India where the Mercedarian priests could recruit and train candidates before sending them abroad. The best practice would have been to give full training till their priestly ordination in any of the Major Seminaries but the Superiors had no inclination to do so.

On May 19, 1979, Fr. Luigi D'Italia and the two Indian priests, Fr. Tomy Veliyil and Joseph Kuttipurath came for a short visit to Cochin but still no decision had been taken to start a House. To everybody's surprise, Fr. Tomy Veliyil left the Congregation and disappeared without even leaving his address in the United States, thus leaving Fr. Joseph Kuttipurath as the sole Indian priest in the Congregation.

Two silent decades rolled by before Fr. Emilio Aguirre Herrera was elected the Father General in 1986. The Rev. Father organised a programme to make the Provinces of the Order aware of the missionary work. Thus during the Provincial Chapters the concept of missionary work reverberated. At the Chapter of the Roman Province in 1991 the idea was approved by a unanimous vote and the decision was taken to initiate steps for the opening of one mission. Fr. Salvatore Polo, newly elected Provincial, soon set to work with enthusiasm, visualising a concrete possibility to start a monastery in Africa with a mission already started by the Capuchins there.

Remembering the invitation Bishop Joseph Kureethara of Cochin had made many a time and realising that the Mercedarian Order had never had a Community in Asia, it was decided to opt for Asia first. Thus on February 23, 1992, V. Rev. Fr. Ignazio Salvatore Polo, the Provincial, Fr. Joseph Kuttipurath and a Lay Brother arrived in Cochin and requested permission to start a Monastery in the Diocese. The blessing and inauguration of the Mercy Monastery was thus performed at the newly built Parochial House of St. Augustine's, Aroor, which was used as their temporary abode.

Very Rev. Fr. Salvatore Polo and six Mercedarian priests arrived in Cochin and they set out to look for a place at Edacochin. After some search they found one, a marshy place, along the backwaters on the western side within the parish of St. Lawrence. The foundation stone of the Mercy Monastery was laid on 28th October 1992 by Very Rev. Fr. Salvatore Polo and Fr. Mariano Frescati. Arrangements for their temporary stay were made and the inauguration of the Mercy Monastery was accomplished on 28th December 1992 at the Parochial House, Aroor.

A priest from the Archdiocese of Verapoly, Rev. Fr. Sebastian Vattaparambil, who was the Parish Priest of Little Flower Church, Pottakuzhy, joined the Mercy Fathers in May 1994. He was sent to Frascati, Italy, to make his novitiate but after a few months he left the Congregation. V. Rev. Fr. Ettore Ricci was elected in the meantime as the Provincial in the place of V. Rev. Fr. Ignazio Salvatore Polo.

Fr. Joseph Kuttipurath, the first Superior, did a very good work on the reclamation of the marsh and building the compound wall on the property at Edacochin. Fr. Vincenzo Pennella started teaching Latin at the Diocesan Minor Seminary from June 19, 1994 and it was under his supervision that a large and beautiful building of the Monastery of Our Lady of Mercy at Edacochin was constructed. The monastery is situated very close to Kumbalanghy and its backwaters. There is a lake on the western side of the property where the boys can fish. Even before the solemn inauguration, they had shifted their residence from Aroor to Edacochin on February 12, 1997. The blessing and inauguration of the monastery were on March 15, 1998.

V. Rev. Fr. General Emilio, Provincial, Rev. Fr. Ettore Ricci and many priests from America and Italy also were present on the occasion. They were invited by Msgr. Joseph Kalappurakal, the parish priest of St. Lawrence, Edacochin, to celebrate a Holy Mass in the parish church. A solemn welcome was given to the Mercy Fathers by the parish of Edacochin.

The blessing of the monastery took place at 4 p.m. on Sunday, 15th March 1998. The Superiors were led in procession to a platform arranged in front of the Monastery. After the meeting, all went into the chapel, large and beautiful with statues of many of the saints of the Mercedarian Order. The Bishop of Cochin was the main celebrant. Blessing was done by the bishop, His Excellency Rt. Rev. Dr. Joseph Kureethara, the Fr. General and by the Provincial. Holy Mass followed. Many priests joined the concelebrated Mass.

In India right now they have only a House of Formation but throughout the world the Order has been involved in pastoral work, missionary activities, jail / prison ministry and education of youth.