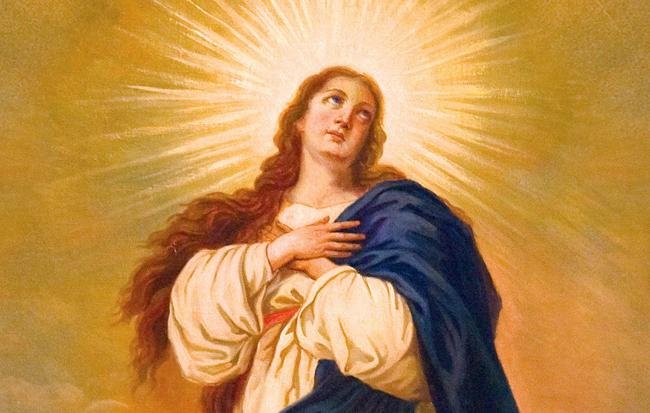 The Congregation of the Franciscan Immaculatine Sisters was founded on 8th December, 1881 by the Capuchin, Father Lodovico Acernese, a great estimator of Franciscan Third Order at Pietradefusi (Avellino), Italy. In the Church of St. Egidio in Montefusco, Rev. Fr. Lodovico announced in April 1869 that he was going to start the Third Order in the parish. There were many men and women interested and among them, was a girl by name Teresa Manganiello.

She was the daughter of an honoured and affluent person. A beautiful soul, endowed with a generous heart and a compassionate mind, Teresa was as pure as the lilies of the valley. She had immense spiritual strength and so she used to help others as well to walk in the way of virtues, goodness and perfection.

Teresa's strengthened faith spurred her enthusiasm for mortification and this made her resolute in her craving to consecrate herself to God. This ardent yearning of Teresa to belong completely to God inspired Fr. Lodovico and the Rev. Father began to contemplate on a Congregation. When he saw the fervent Tertiarie and many other girls around with the same idea, he beamed with elation that it could be turned to reality.

In 1875 when Teresa had an opportunity to go to Rome, she asked Pope Pius IX a particular blessing for the realisation of their projects, their 'Congregation in the making' and their director. His Holiness said to her: "I bless your holy aspiration, the Father director, his efforts and the infant Congregation." The blessing of the Holy Father encouraged Fr. Lodovico who had in fact young Teresa Manganiello in his mind as the head of the new Religious family.

However, man proposes but God disposes. Teresa Manganiello died suddenly of a terrible disease at the age of 27. The departure of this pious soul was like the timely sowing of a selected live seed in a fertile field. Her examplary life produced so many sprouts that it eventuated the establishment of the institutional orchard, Franciscan Immaculatine Sisters.

But the period was a time of tests, trials and tribulations for Fr. Lodovico who had to face many hurdles and hazards. Still, as a man of prayers, he kept seeking celestial illumination and remained steadfast. Everyday the embryonic concept was growing and assuming form and features in his intellectual womb. Fr. Lodovico started gathering money, little by little, to provide a suitable cradle for the congregational infant yet to be born. At the same time he began to write a constitutional frame work, a rule of love, which was inspired by that noble 'Poverello', Francis of Assisi.

In the silent, serene morning of the feast of Our Lady of Immaculate Conception, Rev. Fr. Lodovico as Founder, accompanied by Fr. Valentino da San Remo as delegate of Father General and some Capuchin priests celebrated Holy Mass and let the Lord sanctify the place. Thereupon the Sisters took possession of their monastery and then gathered for the election at which Sr. Immacolata del S. Cuore was chosen as Superior. Before the new Superior the Sisters knelt and made their oath of obedience and allegiance.

After the office of oath taking the Father Founder entrusted the Superior with the Rules of the Order and the key to the enclosure. The celebrations came to a conclusion with a procession of the Blessed Sacrament that marked the birth of the Franciscan Immaculatine Sisters as a Congregational entity. Four days after the institution, on 12th December 1881 the Congregation was granted approbation by the Archbishop of Benevento.

On March 18, 1950 the Congregation received the Decree from the Holy See, thereby rising to the rank of an Institute of Pontifical Rite. Now the Congregation has missions in Brazil started in 1950 and in the Philippines in 1982. On 21st March 1991, the Congregation was able to establish a Community in the Diocese of Cochin through the paternal patronage of His Excellency, Rt. Rev. Dr. Joseph Kureethara.

The Congregation has to follow Jesus Christ more closely along the path of the Holy Gospel as indicated in the instructions and exhibited in the examples of St. Francis Assisi. The annals of His Excellency, Bishop Joseph Kureethara, sheds light on the beginning of Franciscan Immaculatine Sisters in Cochin Diocese.

Sr. Zuleide Araujo dos Santos (Brazil), Sr. Virginia Santiago (Philippines) of the Congregation of Suore Francescane Immacolatine, together with Sr. Imelda (Superior of Our Lady's Convent, Thoppumpady) and Sr. Teresita d/o Policarp Parathumveettil, west of St. Sebastian's Church, Palluruthy, called on His Excellency on March 26, 1991. Theirs was no mere courtesy call but specific mission to seek permission for the establishment of a convent in Cochin Diocese. In fact they had been staying with the family of Sr. Theresita Policarp since early March as they had contact with the F. M. M. Sisters at Thoppumpady.

An old Jesuit House near Santa Cruz High School, Fort Cochin, had then been occupied by the Augustinian Sisters. Their House at Palluruthy was almost complete and they were about to shift to their new Convent. So the Bishop proposed that they could use that building for the time being.

The first letter requesting permission to set up a convent was sent on 5th May 1991 by Mother General, Elizabetha Gnerre, Suore Francescane Immacolatine, 83030 Pictradefuri (Avellino), Italy. The bright day, 6th May 1991 witnessed the blessing and inauguration of new Convent. Sr. Teresita, Superiors of F.M.M Convents, Thoppumpady and Kattiparambu, some Canossian Sisters, three aspirants, some Franciscan Fathers from the Friary at Karuvelipady and a few priests of Cochin Diocese were present on the occasion.

Mr. Kunju Kalapurakal was generous enough to donate a property at Edacochin and on July 2, 1991 the foundation stone for the convent edifice was laid on the plot. Mother Elizabetta Gnerre, Superior General, Sr. Jangela Vetrone, the General Procurator, Mr. Kunju Kalapurakal and many others were present at the ceremony.

The Sisters shifted their residence to a larger building, Ballard Bungalow, in Fort Cochin on 24th November 1992. When the convent building was almost complete, they moved into their new permanent structure. The solemn blessing and ceremonial inauguration of this new Convent of the Congregation of the Franciscan Immaculatine Sisters at Edacochin took place on 4th November 1997 at Edacochin.

The Founder, Fr. Lodovico, was outstanding for his very special love for the Virgin Mary under her title of the Immaculate Conception. He consecrated to Mary this Institute as "a new homage in honour of her Immaculate Conception as a daily reparation for the outrages committed against God, particularly, for sensual excesses".

Particular missions of this Congregation are catechetical instruction and academic education of children and youth, especially young women. Besides, they render pastoral assistance in parishes and their missionary activities include social assistance compatible with the spirit of the Institute in response to the needs of the Church.