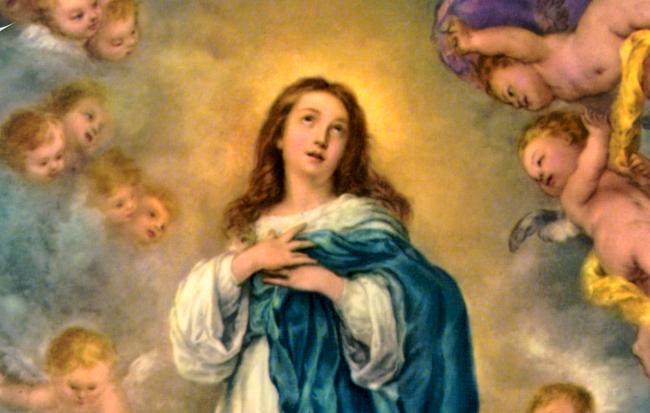 The Congregation of the Franciscan Hospitaller Sisters of the Immaculate Conception is one of Pontifical Rite. Its seat of government is in Portugal and it follows the rules of the Third Order Regular of St. Francis of Assisi. It's Co-Founders are Fr. Raimundo dos Anjos Beirao and Mother Maria Clara do Menino Jesus, two great really charismatic and pious souls. Aflamed with divine charity and ardent desire to render relief to the oppressed, they comfort the downcast, uplift the downed and assist everyone in any kind of need.

Mother Maria Clara of the Child Jesus was born on June 15, 1843. She was the descendant of a famous and noble family of Portugal. Having completed her pilgrimage from the womb to the tomb, she was called to her eternal reward on 1st December, 1899. By then the poulace had already bestowed on her the endearing title, "Mother of the Poor".

Maria Clara lost her parents during 1856-57 when the epidemics, cholera and yellow fever were rampant in Portugal. She was educated at the orphanage of the palace of "Ajuda". At the age of 19, she went to the palace of the Marquis of Valada where, for five years, she lived a happy life. While there she experienced the call of God and renouncing everything, she decided to follow His footsteps. She entered St. Patrick's Convent in order to spend her life in total dedication to God. Thus did begin her consecrated life in the Third Order of St. Francis under the spiritual guidance of Fr. Raimundo dos Anjos Beirao.

Violent persecution of Religious Institutions was the order of those days in Portugal. So Sr. Maria Clara spent the time of her Novitiate and made her first vows with the Hospitaller Teaching Sisters in Calais, France. On return to Lisbon, for the love of God she founded the Congregation of the Hospitaller Sisters of the Poor. As an association of charity, the Community was accepted by the Portuguese Government on 22nd May, 1874. The Holy See approved it as a Religious Congregation on March 27, 1876.

Gifted with a heart overflowing with goodness and hands full of tenderness towards the poor and the abandoned, the Servant of God dedicated her whole life for the alleviation of pain and sufferings. She set up centres of acceptance, assistance and instruction all over Portugal where those in real need could find care, help, support and above all affection, regardless of their social status or conditions.

She felt impelled to proclaim God's love to everyone from far and near. Quite so, she sent her Sisters to Africa (Angola, 1883; Guinea and Cabo Verde, in 1893) and to Asia (India, in 1886). During her mandate as Superior General and Foundress, she opened more than an hundred Houses and received more than one thousand Religious. To her, though, nothing really mattered but the glory of God on high and the welfare of the brethren around her.

Through the Sisters, the Congregation could always be present and active wherever there was good to be done and wherever there was a need for a solution to a problem. Even amidst several sufferings such as loneliness, illness, persecution, misunderstanding, slander - Mother Clara ever remained loyal to the Lord and to the mission He had entrusted to her. She remained devoted to her commitments, serving others joyfully and generously and forgiving everyone without exception in true faith and heroic love. Since Mother Clara firmly believed that nothing happened without God's permission, she accepted everything as gift from God - persons and situations, sufferings and joys, health and sickness.

Her self-giving took her to the limit of her might. She had founded her Congregation with one aim - to love, serve and strengthen all, by sacrificing herself and if necessary, even at the expense of her own life. An unlimited optimism, steadfast hope and boundless trust permeated throughout her life. Even when everything around her was depressing, dark and dangerous, she never flinched. Possessing nothing but the love of God in the suffering Christ and in all those whom she had chosen as "her people", Mother Clara could peacefully breathe her last. She was sure that the good Lord would send her countless vocations to continue her mission of bearing witness to the motto: "Where there is good to be done, do it". She had absolute faith in God's Providence and heavenly help from Mary Immaculate, model and teacher of hospitality.

The Congregation had been nursing and nourishing the hope of opening a House in the State of Kerala for long. Though there had been invitations from different dioceses in the State, the Provincial Superior Sr. Musela Nunes decided to contact Rt. Rev. Dr. Joseph Kureethara, Bishop of Cochin. She wrote to His Excellency in May 1993 seeking permission to render their services in the Diocese. The Bishop had visited their Mother House in Lisbon in 1992 and so was happy to reply positively. In June 1993, His Lordship requested the Provincial Superior to visit Cochin and to choose a suitable place for establishing their Convent.

On September 5, 1993, Sr. Musela Nunes, the Provincial Superior and Sisters Mary Augustine and Betty Kathryn D'Souza, councillors, called on the Bishop. His Excellency showed them various places and then volunteered to donate a piece of land at Palluruthy. Regarding their mission, the Bishop suggested that since the Diocese did not have a Home for the Aged they could take up that apostolate. The Bishop was kind enough also to offer them a temporary abode to start with until they put up their own.

Trusting in His providential care, the Sisters started their House. On 22nd March 1995, the foundation stone blessed by the bishop was laid at Palluruthy by the Mother General, Sr. Maria Eneied Martin Leita. On October 24, 1997, they shifted to their new copleted House there. This abode was solemnly blessed by His Excellency, Rt. Rev. Dr. Joseph Kureethara and inaugurated by their Mother General, Mother Maria Isild Freitas on March 14, 1998.

Thus summed up, the narration brings briefly up to date the story of the Congregation here in the Diocese. But its real introduction was way back in 1991. Very Rev. Mother Elfriede Martins Leite, the Superior General of the Franciscan Hospitaller Sisters of Immaculate Conception, was to be on her canonical visit to their Houses in India. On this information, the Superior General of the Congregation of Our Lady of Victory in Portugal got in touch with Mother Elfriede. The Rev. Mother was requested to meet Bishop Joseph Kureethara on their behalf and seek permission to erect a convent in Cochin as their Foundress was born in India.

Mother Elfriede, Sr. Josefa Lopez dos Santos and three other Hospitaller Sisters arrived at the Bishop's House in Cochin, on 9th November 1991 and His Excellency approved the request of the Sisters of Our Lady of Victory. After leaving Cochin, the Provincial of the Hospitaller Sisters, Sr. Musela Nunes, Goa, made a strange request that she too wanted a House of the Franciscan Hospitaller Sisters in Cochin. They have 36 Houses in India and about 500 Sisters. In fact the first one had been set up in Goa in the year 1896 after the Congregation had its start in Portugal in 1870. But later on nothing more had been heard of the Congregation of Our Lady of Victory till then.

The official request from the Franciscan Hospitaller Sisters was sent to the Bishop of Cochin on 3rd June, 1993 and His Excellency, Rt. Rev. Dr. Joseph Kureethara, gave them permission on September 5, 1993. Soon three Sisters from Goa arrived in Cochin and they were given the old Santa Cruz Boarding House as their temporary sheler at Fort Cochin. On December 1, 1993, the blessing and inauguration of the convent of the Franciscan Hospitaller Sisters was performed. The Provincial, Sr. Musela Nunes and Councillors were present on the occasion.

The Diocese of Cochin donated a property on the western side of the St. Mary's Syrian Church, Palluruthy and it was registered in their name on 26th September, 1994. The foundation stone of the Assisi Sadan at Palluruthy was thus laid by the Mother General, Maria Eneide Martin Leite on March 22, 1995. When the structure was half way, the Sisters moved into their new abode on 24th October, 1997.

The ideal of the Franciscan Hospitaller Sisters of the Immaculate Conception, has ever been, to give joyous witness of their total consecration to God, being generously available to their more needy brethren, according to the Spirit of the Beatitudes and their specific charism - hospitality.

Faithful to the motto of their Founders, Fr. Raimundo dos Anjos Beirao and Sister Maria Clara do Menino Jesus, "Where there is good to be done, do it" and like St. Francis of Assisi, the main Patron of the Congregation, a Hospitaller Sister welcomes any opportunity to serve the needy. But the Congregation does not rest and remain in anticipation of opportunities to come and knock on its door. Instead the Sisters step into the society to serve and offer succour to those in dire straits.

Therefore, the Congregation has as its mission education of the youth, accommodation of and care for the homeless children, assistance to the elderly and senile. They render help and nursing to the sick, educate and edify the mentally retarded. Nay, they even bring up the innocent but abandoned little babies. They get involved in exercising pastoral ministries and thus remain bearers of the word of God in the missions.