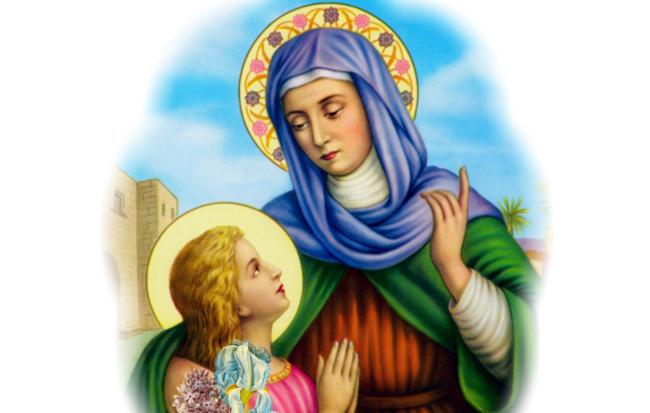 The Daughters of St. Anne is a Congregation which continues the mission of Jesus in the Church. They render charitable services to all, whatever the situation. The Congregation was founded on December 8th, 1866, at Piacenza, Italy. Mother Rosa Gattorno is the foundress. She started it with a group of five people who had the same ideal as she had.

Mother Rosa Gattorno was 'a strong woman'. She was blessed with the rare gift of the three dimensional experiences in life - of a wife, a mother and a religious. And thus from the crucible of the rough realities of life, she found the unity of love in the total dedication to God and to fellowmen.

Born in Genoa on 14th October 1831, she became a widow in 1858. Thenceforth Rosa Gattorno dedicated herself completely to the care of her children, her elderly parents and to various work of mercy. Obedient to the voice of God and Pope Pious IX, she founded the Congregation of the Daughters of St. Anne.

A courageous woman with sublime compassion, she perceived the love of Jesus and heard the call of God. She would have liked a thousand lives to consume God's love. Rosa realised that loving God meant loving brothers and sisters around her. Contemplating Jesus crucified, her burning desire was to imitate Him in daily life. By her total dedication and supreme sacrifice to bring Christ to wipe the tears of the brethren around her, she became a prototype of benevolence and compassion and a living witness to Christ crucified.

In 1878 she sent her first missionaries to South America and in 1886 to Criterea. After completing her earthly pilgrimage in Rome, she was called to her heavenly abode on May 6,1900. Her mortal remains are interned at their Generalate House in Rome.

The Congregation has an ideal and style of life regulated by rules that make them active in the Church. This style of life lived by the Foundress and handed over to the Congregation is 'spirituality'. This spirituality carries with it the dimension of the poor of God that St. Anne lived and transmitted to Mary. It is a biblical spirituality, characteristic of the people who have remained faithful to God of the Alliance.

The Foundress often used to say that she 'would like to go everywhere and cry out to everybody to come and love her Lord Jesus Christ.' The personal notes of Bishop Joseph Kureethara reveals how the aspirations of their Foundress were made a reality by the establishment of their House in the Diocese of Cochin.

The Congregation came to be planted in our country first at Visakhapattanam. It was initiated at the invitation of His Excellency Mariadas Kagittappu, Bishop of Visakhapattanam. The Daughters of St. Anne opened a temporary House there in 1990. Somehow the climate and the environ proved unfavourable. In one year they had only two candidates. Of these, one left but the other, Sasikala remained. Bishop Mariadas then advised them to move south - to the Diocese of Cochin.

On this advice, Rev. Sr. Anna Severina Loria and Sr. Francisca da Costa came to Cochin. They had a meeting with His Excellency, Rt. Rev. Dr. Joseph Kureethara. Decision was taken then to open their House in the Diocese. The House was subsequently inaugurated on July 26, 1991 and thus St. Anne's Convent came to be established in Kumbalangi.

The Daughters of St. Anne is from Rome - obviously of Latin Rite. The Rev. Sisters Anna Severina Loria and Francisca da Costa apparently appeared unaware of Rite differences, let alone rivalries. The bishop had already had harrowing heartaches over the syndrome of snatching 'Glory to God' for claiming credit and exultation; sorry, rather, self exaltation!

Perhaps His Excellency considered it cruel to let them remain ignorant of the under currents. At least the Bishop wanted them to be spared of future unpleasantness. Whatever it be, the Sisters were hinted on the advisability of setting up their House in a Latin Diocese. Well, the Rev. Sisters made their decision and. thus reached the Rosary Convent, Palluruthy, on June 13, 1991.

At their Generalate, in Rome, Italy, there were some Sisters of the Syrian Rite doing their studies. Thus they came to know a CMC Sister, Regina Mary and with her help the Rev. Sisters Anna Severina Loria and the Assistant General Sr. Francisca da Costa reached CMC Generalate, Thaikattukara, Alwaye. Then they arrived in Cochin to meet His Excellency Rt. Rev. Dr. Joseph Kureethara on 8th June 1991. The Rev. Sisters had a letter from Bishop Mariadas.

When the Bishop came to know that the Sisters had no knowledge of rite differences, His Excellency advised them to confine recruitment of candidates to a single rite. As their Congregation is of Latin Rite, they preferred to open their House in a Latin Diocese and so the candidates they had selected from other rites were sent to some other Congregations.

The Bishop of Cochin offered them a three storeyed building at Thoppumpady. On July 26th, 1991 the blessing and inauguration of St. Anne's Convent in Cochin Diocese were accomplished. They started looking for locations like Neendakara, Perumpalam etc. to set up their convent. Finally they selected a property at Pazhangad.

The property was bought on October 24, 1991. The foundation stone was laid the following October on 26th. The official request for the establishment of the Convent in Cochin Diocese had been earlier on June 8. The canonical erection of the convent was fulfilled on 7th June 1995.

They are here in India to fulfil the desire of their Foundress. She has expressed her desire, in these words "I would like to go every where and cry out to every body to come and love You, O Lord". They want to spread the charism that God gave Madre Rosa - identification with Christ in the mystery of His poverty and manifestation of the mercy of the Father in all brothers and sisters. They continue the process of carrying the seed of hope in the heart of humanity. For the present, they are trying to understand and assess the needs of the people.