CONGREGATION OF THE SISTERS SERVANTS 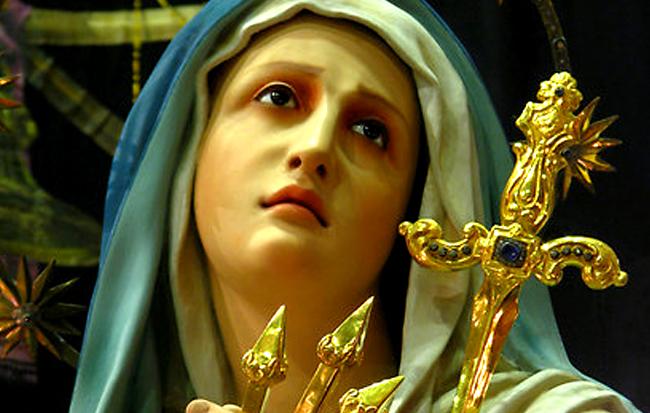 The Congregation of the Sisters Servants of Our Lady of Sorrows found its inception in Florence, Italy, about the year 1854. Then a group of Tertiaries of the Order of the Servants of Mary decided to live together. Under the direction of Sr. Veronica Donalti the group began to lead a community life. This was aimed at perfecting themselves at their vocation and devoting themselves to the calling of bringing up girls from circumstances pinched and precarious and hence under pathetic plight.

But in 1865 Sr. Veronica forsook the group, virtually leaving it in the lurch. They were thrown into so grave a financial crisis that its very communal existence was on the verge of collapse. The Servite Friars from the monastery of Annunciata, who were very much interested in this small community from the very beginning and observing them from the very beginning, stepped in to save the group.

The Servite Friars had been following with hope and trust the daddling of this community from its very early childhood because of its Florentine origins and because it was an off-shoot of their own Order. The Friars decided to entrust the small community to the tertiary, Sr. Giuliana Signorini. Accepting the responsibility, she devoted herself whole-heartedly to the development of the Institute and to the shaping of its character, which was to conform faithfully to the Servite charism. On her death on 20th November 1873, the Institute had become a vital, expanding Order. Aggregated to the Servites, the Congregation secured its first Constitution in 1877 from the Archbishop of Florence, His Grace, Msgr. Eugenio Cecconi.

Always involved in the education of young girls and the care of the poor and ailing, the Institute grew rapidly and soon many new Houses were founded in Tuscany and other parts of Italy. On July 9, 1913, the Sisters received the "Decretum Laudis" from the Holy See and on December 22nd 1931, the definitive approval and thus rose to Pontifical status. In 1938 the Congregation's apostolic service was extended to Chile, in 1973 to Columbia, in 1988 to India and in 1991 to Hungary.

The acquaintance of Bishop Joseph Kureethara with the Italian Dominican priest, Fr. Reginaldo Bernini, had been instrumental in the arrival of many Congregations from Italy. Likewise, the Community of Our Lady of Sorrows also reached India out of that same friendship. From Piazza Sopra Minerva, Rome, Italy, the Rev. Father wrote to the Cochin Bishop that the Congregation of the Sisters Servants of Our Lady of Sorrows would like to open a House in India.

At Perumpadappu another Congregation of the Servites of Mary had already started a House through the Bishop's help under the name of "Our Lady of Dolours" Convent. The Congregation of the Sisters Servants of Our Lady of Sorrows has about 230 professed Sisters in Italy and in Latin America among whom are 20 Indians. The Mother General, Rev. Amelia Nucci had accompanied the Indian Sisters twice or thrice during their home visits and had stayed at Perumpadappu Convent with Mother Ubaldesca. Though all the Indian Sisters were of oriental Rite, their Council General decided to have their House in a Latin Diocese. Fr. Bernini had recommended the Cochin Diocese and if not possible, to search for prospects in Alleppey or Quilon.

In October 1987 Madre Amelia Nucci, the Mother General, arrived with Rev. Ida Maria while Bishop Joseph Kureethara was attending the CBCI meeting of the Clergy Commission at Dhyana Ashram in Madras. His Excellency had arranged with H.E. Dr. Peter Chenaparambil, Bishop of Alleppey and Rev. Fr. Paul Arackal to propose a place at Kandakadavu or in Saudi parish. Madre Amelia, after coming to Cochin, had the chance to talk to H.E. Dr. Francis Kallarackal, Bishop of Kottapuram. As soon as the Bishop of Cochin returned from Madras on 27th October1987, Madre Amelia called on His Excellency and conveyed her inclination to have their convent in Cochin Diocese itself.

The Bishop showed her some places in the Diocese of Cochin and when she saw the diocesan property at the southern end of Kumbalam, which had been intended for the erection of a monastery, Madre Amelia openly displayed her predilection for the same. After consulting the Diocesan Counsellors, His Excellency agreed to place the plot at their disposal. The official request from Madre Amelia Nucci was submitted to the Diocese on 6th that November and permission for the same was granted by His Excellency on the same day.

On 3rd January 1988 six Sisters, Assistant General Madre Angela Lenzi, Sr. Maria Luisa Rossi, Sr. Maria Pia Mundiyamkal, Sr. Maria Kunjamma Perunilathil, Sr. Maria Sara Kuruvila, and Sr. Maria Rita Perumbel arrived from Italy. They were accommodated at Ballard Bungalow in Fort Cochin. On the second night of their stay there, the Sisters were terribly frightened by some boisterous ruckus from downstairs. Quite alarmed by the riotous uproar, they called the priests at the Bishop's House. The fathers rushed to the place but everybody had a hearty laugh when they realized that the noise was made not by burglars but by a picnic party that had come late at night to stay at the Santa Cruz College in the immediate vicinity.

On 25th March 1988 the foundation stone for the Convent at Kumbalam was laid by His Excellency on the plot of land just over an acre and the construction of the compound walls commenced forthwith. Later they started the erection of the convent building as per the plan drawn by Madre Amelia and Fr. Bernini. By early 1990, the new convent building of the Sisters Servants of Our Lady of Sorrows was ready with a roof to shelter the Sisters.

Mother General Sr. Angela Lenzi and Sr. Maria Irene Madassery arrived on 28th January 1990 and on 9th February the Sisters shifted their residence from Ballard Bungalow to their own new convent - Holy Mary's Convent - at Kumbalam. His Excellency Rt. Rev. Dr. Joseph Kureethara blessed their kitchen as per the local tradition of house warming and all had a sip of milk, first boiled in the new kitchen. Madre Amelia Nucci, former Mother General, arrived in Cochin three days later. The solemn Blessing and inauguration of Holy Mary's Convent took place at 3.00 p.m. on Sunday, 17th February 1990, on the feast of the Seven Founders of the Congregation of the Servant Sisters of Our Lady of Sorrows.

At 2.55 p.m. Msgr. Paul Kattichery, the Vicar General, Fr. Jacob Mavumkal, Fr. Ignatius Kavalakkal and His Excellency Joseph Kureethara reached the decorated arch erected at the entrance to the side road leading to the Holy Mary's Convent on the eastern end of the Aroor Kumbalam bridge. Rev. Madre Angela Lenzi and the Ex-Mother General Amelia Nucci and Indian Sisters, together with many priests including Rev. Fr Reginaldo Bernini O.P., several Sisters from other Religious Congregations and people and parishioners of St. Joseph's Kumbalam, warmly welcomed the Bishop and then in procession moved to the chapel.

Madre Amelia Nucci lighted the traditional brass oil lamp kept in front of the chapel along with "Nira Para", ( Measure filled with paddy and decorated with a bunch of coconut flower ). Madre Angela Lenzi cut the ribbon at the main door of the chapel. After reaching the altar, His Excellency blessed the altar, the whole new convent building accompanied by Msgr. Paul Kattichery, Fr. Bernini, Madre Angela and Madre Amelia and a few Sisters. Thereafter followed the concelebrated solemn High Mass, during which Sr. Maria Rita and Sr. Maria Kunjamma read the lessons and made their final vows in the presence of Madre Angela Lenzi and Madre Amelia Nucci and signed the document.

Forthwith the Sisters set out on their mission on catechetical and pastoral activities of the parish. It did not take them long to realise the need to step into the field of education of the girls as well. Thus Holy Mary's College (Parallel) was started at Kumbalam in July 1990 for Pre-Degree Course, in the building attached to the Convent. Later in 1995 they upgraded the facilities offered to include Degree Courses also.

In July 1991 the Procurator General Sr. Ida Maria and Sr. Maria Luisa arrived in Cochin for discussions with His Excellency on matters concerning a Novitiate House. Quite pleased with the proposal and happy over the developments, His Excellency offered a temporary house at Thoppumpady. Thus on 19th October 1991 the new Novitiate House of the Congregation was blessed by His Excellency at Thoppumpady. While staying there, the Community bought a plot of land close to the Church in the parish of San Thome.

Matters moved fast on the plan and project of a new convent at the plot purchased. Thus on Sunday, 24th May 1992, His Excellency Rt. Rev. Dr. Joseph Kureethara blessed the foundation stone for their new Convent at San Thome. Rev. Fr. Reginaldo Bernini, Fr. Mariano, Priests and Sisters and the flock of San Thome parish were present on the occasion. The sketch and plan on paper took a few months to assume concrete shape in brick and mortar but the second House of the Congregation was ready by the end of 1993.

On Saturday 15th January 1994, His Excellency, Dr. Joseph Kureethara blessed their second House, "Santa Maria Convent" at San Thome and celebrated the Holy Mass, in the presence of many priests and Sisters and parishioners. In the same year His Excellency blessed their Nursery School and in 1996 they started an English Medium L.P. School close to the Santa Maria Convent.

Since its origin the Congregation has devoted itself to the practice of charity, development of children and girls through education and care of the young, especially among the unfortunate ones who struggle for existence and survival but hover between life and death. So they consecrate themselves to dedicated service and love towards such people as their apostolic involvement. In this their mission, they commit themselves to be a part of the history of salvation, in the silent but active presence of the Holy Mother at Calvary.

This sharing in the experiences of Holy Mother's sorrows translates itself concretely to attitudes of mercy, humility, justice, wisdom and love. To be a Sister of Our Lady of Sorrows means carrying the mission of the Mother of Jesus in their lives, sealed and consecrated to their service, realizing the fecund force of the Mother of God in their faith in resurrection. In partaking of this apostolic mission of the Church, they follow the example of the Virgin Mary and prolong it in this world. From her they learn to welcome Christ and to give Him to others. Like her who lovingly shared in her son's supreme sorrow, they desire to be at the foot of numerous crosses of the brethren to bring comfort, confidence and redeeming co-operation.

In dynamic loyalty to the charism of the Congregation, they continue within the Church their service of evangelization and promotion of human qualities. Hence they devote themselves to the education of children, formation of the young people and to the rendering of services to the suffering and the lonely. Their specific mission is to give love to the sick and the suffering, especially the old and bring to them the blessing and consolation of and hope in, the Lord. These multi-faceted contributions are in collaboration with the local church in its various pastoral activities. Their Mother Foundress has left an open path for them in their present apostolic mission in following her footprints and in looking for signs on the sands of time.