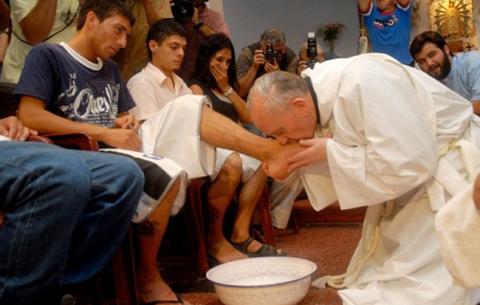 During the Jubilee Audience held on Saturday, 12 March, in speaking about the act of the washing of feet, Pope Francis stated: “By washing the feet of the Apostles, Jesus wished to reveal God’s mode of action in regard to us, and to give an example of his ‘new commandment’ (Jn 13:34) to love one another as He has loved us, that is, laying down his life for us”. Delving deeper, he added that love “is the practical service that we offer to others. Love is not a word, it is a deed, a service; humble service, hidden and silent”. Indeed, “it is expressed in the sharing of material goods, so that no one be left in need”. It is, moreover, “the lifestyle that God suggests, even to non-Christians, as the authentic path of humanity.”

In light of these considerations we can understand the symbolic value intended by Pope Francis’ visit to the CARA in Castelnuovo di Porto and his bending down to wash the feet of refugees. His actions mean to tell us that it is important to pay due attention to the weakest in this historic moment; that we are all called to restore their dignity without resorting to subterfuge. We are urged to look forward to Easter with the eyes of those who make of their faith a life lived in service to those whose faces bear signs of suffering and violence.

He performed the ritual washing of the feet of a dozen people – eleven guests of the C.A.R.A. Centre and one woman who works at the Centre for Auxilium. Four of the guests taking part in the ritual were Nigerian Catholics, three others – all three women – were Coptic Christians from Eritrea, three others were Muslims from Syria, Pakistan and Mali, and one was an Indian Hindu. Many of these young people are not Catholic. Therefore this gesture by Pope Francis takes on even more eloquence. It points to respect as the royal road to peace. Respect means being aware that there is another person beside me. A person who walks with me, suffers with me, rejoices with me. A person whom, one day, I may one day lean on for support. By washing the feet of refugees, Pope Francis implores respect for each one of them.